Deep in the woods there is a great way to ensure that you get fantastic wildlife photography opportunities.  Leave your camera home.

I’ve said before that our deer population is too high, and this year more than ever.  Among the family here, there is one deer that has learned that Buddy and I are harmless.  Harmless enough that in the woods he lets us come close enough and stay long enough to discuss life.  The deer doesn’t say much, but he seems to be interested in what I say.  Stupid things humans say to wild animals.

Keep in mind that Balsamea is densely forested, surrounded by forest on all sides, and many miles of it, with a smattering of houses.  Our deer have not acclimated to people by their suburban gardens.  Deer at Balsamea are wild.  As they should be.  Just one of them is getting too familiar with us since mid-summer. 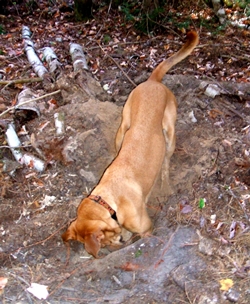 I like to believe his affable ways come from living at Balsamea since birth, in that a couple of years ago he could have been the tiny fawn that burst out screaming right in front of me from a trail-side brush pile, because Buddy had sniffed around too closely.  He patrols everything from tall trees to underground.

In one close encounter, we walked within fifteen feet of the deer as he lay napping in a bed of thick, soft moss in the middle of the day.  He didn’t even get up.  Buddy couldn’t see him because of a brush pile in the way, so he didn’t understand who I was talking to.  He kept looking up at me with that “Well?” face. 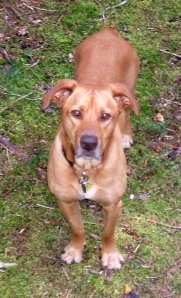 Finally, I took a step toward the deer and intentionally pressed a stick to crack, and the deer — now named Oscar — stood up.  But that’s all he did.  He stood up and we studied each other some more.

With Oscar standing, he and Buddy could see each other, and neither acted as they would if I were not controlling the situation with telepathy and other spooky powers I have in the woods; like the ability to make a hotdog grow out of a fire.

The hot dog keeps Buddy from wandering off, out of boredom, while I’m messing around at one of the fireplaces.  He knows that sooner or later a hotdog is coming out of that fire.  Sometimes it’s a more elaborate dining affair with the hot dog sliced into a tin foil “stew.”  (He gets only a third of the hotdog.  I’m more than twice his size.) 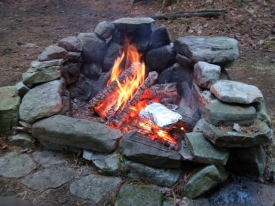 I built this fireplace with a cooking space to the side.

He got bored before I did, and turned slowly to walk away, then stopped.  He completely turned his backside to us, bent down to mow a little something green, leaving us completely out of his view, then slowly sauntered off as if we weren’t there.  He’s either stupid or fearless.

Of course, as in all our in-your-face meetings, I did not have the camera with me.

I’ve noticed over the past several weeks how Oscar has changed from his tan summer suit to his fancy dark winter suit, while his face blackened and his antlers grew.  (Did you know their hair contains air for insulation?)

At the first close visit, his annual antlers were just little rods shorter than his ears.  When we met at the moss bed, they were taller than his ears and curving, but still single prongs.  Last week I noticed a second branch starting, barely visible in the picture above.

The pictures here came from Oscar’s visit to the yard a week ago.  I rarely see deer in the yard during the day any more.  They know Buddy is lying around somewhere, and if I’m not out there, he’ll act like such a dog.

This photo opportunity was lousy even though I did have the camera right there in the kitchen when I saw Oscar through the window.  I was shooting into deep shade with the low afternoon sun blazing into the driveway behind Oscar, as you can see.

When we meet deer in the woods, if I see them first and Buddy is near me, I can keep him still with simple verbal requests and petting.  When I do that, and he gets a chance to study the deer, he does not show any anxiety about a fur-bearer in view.

If Buddy sees it first, then I have to whistle to call him back from a chase.  Oscar in particular doesn’t run far off when Buddy goes after him.  One time he just stood still while Buddy ran about 50 feet toward him, to within a dozen feet of Oscar before I turned him back (with my thousand-foot leash, worn all the time) and Oscar leaped away at the same time.  I wonder if he’s taunting Buddy.  Rare deer have been known to befriend and play with dogs of a certain nature.  But I won’t let it go that far.

As most people know, white-tailed deer often walk silently even through dry leaves and sticks.  You may not know that they can run non-stop for miles.  It’s a fact; this is why I hear them laughing as they run away.

A deer can stand in a place very near me amidst camouflage, where I can look directly at it for a long time, and not see it until it moves.  Good thing they don’t carry guns.

Deer leap and run through the woods in ways that are impossible for any other animal at Balsamea, except maybe hares.  Deer can leap over a five-foot fence easier than I can do a two-footer, and far more gracefully.

At Balsamea this year, we’re seeing deer more often than in any year before, nearly every day and often twice per day, even during our shorter walks of about 15 minutes.

Or, they are off enjoying the rest of their 500 – 600 acres, the typical home range of a deer family.  That’s about the size of your neighborhood within less than a half-mile radius of you.  It’s not much.  In mating season it can be over 800 acres.  Otherwise the home range would get inbred and the deer would become stupid.

For deer, breakfast is in the afternoon.

As fun as it is, I don’t like Oscar being so friendly.  It’s not good for wildlife to get acclimated to people.  It’s bad for them and for us, for enough reasons to deserve a separate article.  I’m waiting to get one good picture of Oscar, after which I intend to run him off every time we meet, even carry a stone in my pocket to make him think I don’t like him.  I’m about to give up on the picture.

You might ask how I know the friendly deer is always the same one.  (They do tend to look alike.)  Don’t be silly.  Oscar wouldn’t let us get duped like that.  Besides, how many wild deer become so tolerant?

I hope you have learned some real facts about deer, and why you should leave your camera home.

Seriously.  The mind is a wonderful three-dimensional “camera,” with audio, full vision of the entire scene as far and as close as the eye can see, at all angles simultaneously, with scent, with the trees brushing in the wind, sunlight glinting from water drops everywhere because a rain had just ended, with wetness making every color and aroma richer, while I’m down on one wet knee petting Buddy, making the moment much more than looking at a deer, whispering, “Stay here.  Okay.  Good Buddy.  See?  See? [pointing]  What is it?  It’s a deer.  Yeah.  See?  Stay here.  Okay.  Good Buddy.  You’re my good Buddy,” and enjoying — even more now than then — the way that while he is so sharply intent on our subject, he also draws my admiration for sitting there, relaxed in my hands, gracefully granting my wish to let the deer relax, too.  Granting me much more than that.  (That was from the first close meeting with Oscar.)

Now that picture is nicer than just a flat square with a deer in the middle, isn’t it?

Cameras don’t capture those graces of the moment.  I don’t need to store everything in flat pixels to be able enjoy them forever.  Why should I put attention into the camera that belongs to the experience it so poorly records?

Taking the picture is worrying about the future, what the picture will do for people in the future, and so often it’s not only a severely limited likeness of the reality, but a crappy picture, too.  So I’ve learned to take many shots, at different settings, so there will be at least one good one, maybe.  Meanwhile, where is my mind?  Somewhere in the future, about a picture of the past, at the expense of some of the present, sometimes almost all of it, because moments are fleeting.

(The camera is a special asset when shooting small things like wildflowers, because I can see things in the pictures that I can’t see with the naked eye in the wild.  So I’m not being an absolutist about this.)

Taking pictures is a great hobby.  It’s good to leave the camera home, too.  There is an advantage to leaving it home.  When I’m out there and wishing I had the camera, I can use that wishing as a reminder of the advantage, and take that instead of a picture.