What is it about a situation like this that seems to
put something like vacuum pressure on the soul?

The situation, the experience, the moment, not the picture.  The picture is a good reminder of what it was like, but as pictures go, it’s just an interesting snapshot of an arboreal skyscraper (I’ll keep the copyright just the same, thanks).  The picture is also a reminder to keep looking up for scenery too often missed.

Backed by a twilight sky and the moon, the beech tree showed up at roadside at the end of a late afternoon’s short hike in a massive new parcel of state land enveloping Ellenburg Mountain in Ellenburg, NY.

Below are a few other things entertaining me that day in the woods, where boredom is impossible, mood problems go into remission, and from which bio-psycho-social health benefits continue into the future.  Yes, there are social health benefits even if you’re out there alone.  Think about it.

Early May was a good time for it, before vegetation overwhelms these logging roads long under nature’s reclamation orders.  I, of course, turned onto the road less taken, and found out why it was not more taken.  Nature had been taking it back longer than the main road (now just a wide trail).

Within a minute’s walk my trail grew overgrown with trees, soggy and swampy, and rough walking among rocks or fight-density brush to get around obstacles.

Buddy and I picked our way through the boggy area; densely matted grasses on top of semi-soft mud between hummock remains of tree stumps long gone.  We passed through a wide, bent pass between evergreens, ending at a swamp (below).  Then we turned upland for an easy but wetbushwhack circle back to the first edge of the bog, through older forest with springtime mud and vernal pools laced throughout.

I regretted nothing about the little adventure.  Tell me this isn’t something to enjoy studying during a time of the year when you’re not swarmed by bugs: 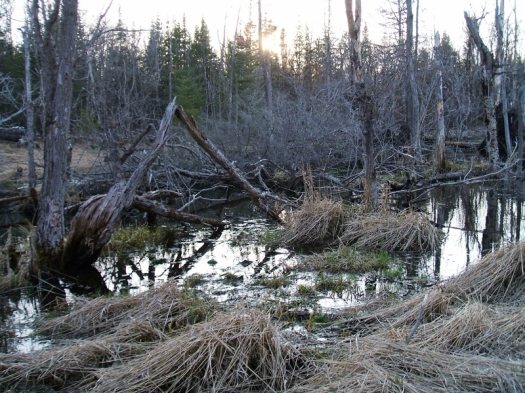 The entire view of this wettest part of the bog, where it became a swamp, was twenty times bigger than shown in the picture, with the nearly setting sun’s yellowy light slanting into tall trees to the east (behind me), surrounded in tan waves of last year’s grasses, speckled with early greening things, entwined in sections of silvery water, among sculpted contortions of dead trees, contrasted with the dark green bordering fir and spruce on the far  side, and, captured poorly in this picture, the sun gleaming through their peaked crowns.  (Hey, sometimes you have to work to read a sentence, when the writer gets lazy.)

We came in from east to west.  Always wishing I can work out a reasonable way to avoid going back the same way I came in, at least partly, I turned south and slightly uphill, through more boggy ground, but walkable.  Right away, I was treated to this architectural pleasure at the west edge of the last open space: 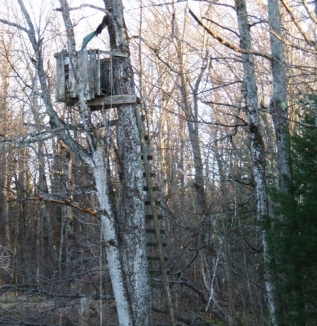 No doubt they built this long before it became state land (about eight years ago).  Many of these former logging lands were leased to hunting clubs before the state bought them.

What a perfect tree it was for this purpose!  Nicely arranged branches, and perfectly positioned for a good view of open space.

If you look carefully at this tree stand, you may sense the care and labor that went into designing and building it.

For example: a handrail!

The ladder intelligently slopes away from the tree toward the bottom, giving you someplace to put your feet as you climb, unlike the ladder rungs I see sometimes that are just nailed to the tree, so you have to go up on your toes grabbing the narrow side of a 2×4.  Here, the last few steps do that, but they cleverly double as floor beam and stanchion brace.

I love studying how they do these things, because I’m certain that it is no easy thing.

Look closely.  On that first vertical slab wood board, those little brown things are hinges!  A door with hinges!  When you think about it, at that height, it’s a good idea to have a latching door, so you don’t fall out after your ninth Bud.  (Unfortunately, beer goes with hunting like buns go with hot dogs.)

The floor appears to be the traditional cargo forklift pallet.  They really are sturdy stuff.  I have two of them that just won’t die, even in ground contact for years.

I like the slab wood wall.  It makes good re-use of a natural resource, and eventually it will return to nature.  The plywood and green painted wood (if that is wood) and nails are less environmentally favorable, but nobody’s perfect.

So wild nature is not the only entertainment out in the woods.  There’s hunting architecture, and a canine companion.  Buddy was in doggy heaven out there.

The next picture is an example of the general morass leading in and out of the swamp.  Our loop south, east and north brought us back to dry land where the trail met the east edge of this area.  I love it when a plan works out, especially a bushwhacking one, because if it does not work out, you may find yourself breaking out the flashlight, and the whole world becomes a different place. 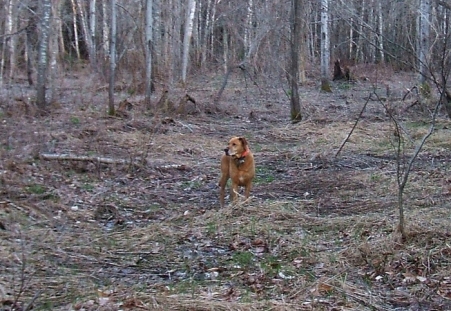 I thought this (below) was a pretty scene on our way out on the main trail.  Not much of this former logging road is so wide and clear as this. 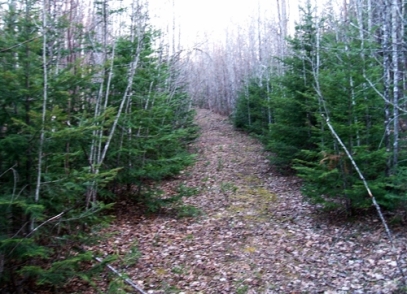 Terrible picture but nice view.  The picture activates that vacuum that draws me instantly back to the moment and how I liked it then.

To my great pleasure, the gate at the entrance prevented ATVs better than many such gates that allow them to get by.  Otherwise this wouldn’t be a trail, it would be a ditch full of mud and water, riddled with trash, including household trash dumping.  That fact alone — ATV absence — makes this an attractive place to come back for a day’s hike deeper toward the mountain.

After getting that moon and beech tree picture, and then a snack (and serving dog food) at the car, I took the long way home by driving west instead of east.  That gave me this little light show: 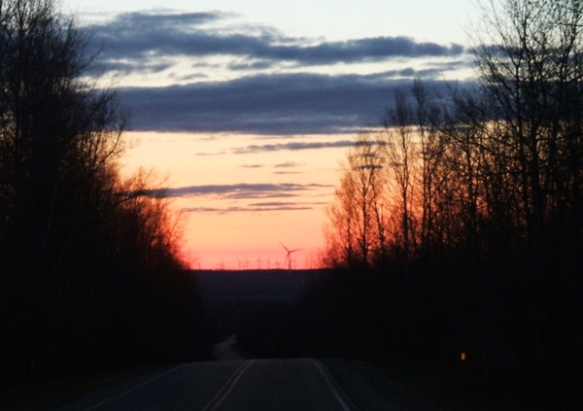 missed the best of the sunset show by five to ten minutes, but I still had fun.

I would say, “Wish you were there,” but I don’t, except for a few of you.  Maybe next time.