It scattered seventy trees across or into Balsamea’s 2.5 miles of trails.   It’s seventy-give-or-take; I lost count a couple of times while stopping to think about how to deal with some of the fallen trees.  Thinking never has been a reliably good idea.  It often interferes with nobler processes, even vital ones.

I’ll never forget the way my heart sank into my stomach when I found 33 trees on the trails on July 18, 2012.  Working on clearing them and rerouting paths around some of them — never with a chainsaw, which violates Balsamea law — I learned that it was good for me and good for the trails.  Often when I addressed a change that Nature threw onto a trail, the result was a better trail or connection to another trail.  I’m sure I don’t have to explain why it’s good for me to go work in the woods, for mind and body and whatever else I may be.

My little Cadivus story of September 7, 2018 explains the immersive experience of co-creating trails with Nature.  Handy excerpts if you don’t want to read the Cadivus post (I don’t blame you):

God is the experience of looking at a tree and saying, “Ah!”
—Joseph Campbell

If just looking at a tree can be a divine experience, or something transcendent, then what may be revealed or experienced when you spend a few days intimately connecting with every part of a big fallen tree and everything on the ground surrounding it, including clearing away many other trees that it fell on, changing it to a playground shaped from what had been a big obstacle fallen onto and blockading an important trail? What does that intimacy reveal?

… When nature clobbers a trail with a big tree, and I work with it instead of against it, the outcome is a better trail. Nature has contributed greatly to the styles and routes of trails here, and she loves change.

Cadivus is a Latin word meaning fallen or windfall, translated in the usual sense of “a sudden gain,” and in the sense of “fruit blown from a tree.” The wind gave me a windfall-deadfall where an abundance of new life began, forever shaped according to a merger of the tree and me. Nothing really died. It was transformed.

… That place, as it exists now, is an expression of me. The tree drew me into combination with — immersion with — its nature. Now I am there forever.

… So Cadivus is not a “wild” place, if you count human influence as unwilding. It is a widened wild. Perhaps Natalie Goldberg would call it an expression of wild mind, or simply wild mind itself.

With seventy trees (plus countless branches and limbs scattered everywhere) now waiting to infuse me into the essence of the forest, and it into me, maybe I should change Balsamea’s name to Cadivus.

In 2012, I was so impressed with the storm that I mapped its impact onto the trail map I created that year.  In the picture below (click to enlarge), the white hash marks across trails are the significant trees fallen into or across the trails.  (There are about 2,000 feet of new trail added since 2012.) 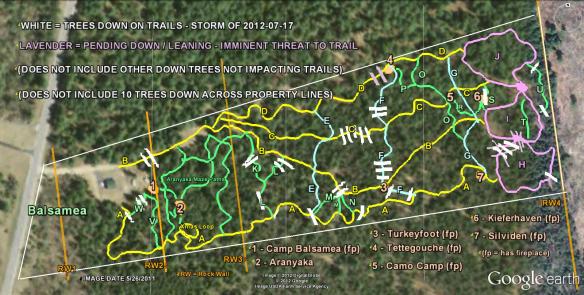 See those white marks from the 717 storm?  Some are hard to detect.  I count 33.  Double the number of white marks, and add a few more.  That’s the Halloween storm.

717 was in July.  I finished the trail rehab in December.  (I do have one or two other things to do, but I should really stop most of them.)  Fortunately, that year we had almost no snow all the way into December.  I have a picture showing only a dusting of snow in December.

This year, the work began yesterday, November 2.  It looks like my snowshoe routes may have a lot of dead ends this year, depending on when we get snow and how much.  Some years we have very little in November.  Last year we had a lot.

I have not photographed the Halloween impact.  You can see what it looks like in the pictures from the July 17, 2012 storm … 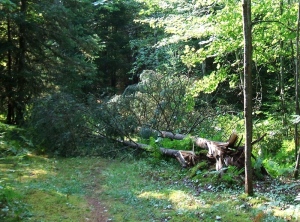 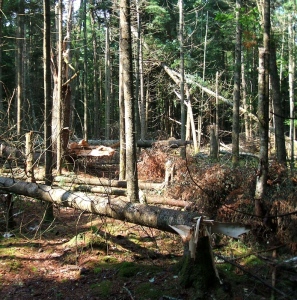 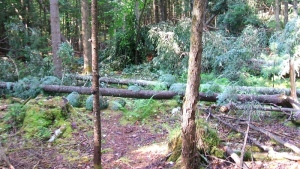 Maybe I will become an outlaw and break Balsamea’s prohibition against using a chainsaw on the trails.  The law is there because a chainsaw makes the standing trees nervous, gives the squirrels and birds PTSD, and insults the peace of the forest.  Compared with my big lopping shear and bow saw, a chainsaw is also a lot heavier and clumsier to carry around, with its gas can, tool bag, leg chaps and helmet.  Still, I can drag the machine on a sled.

My body is not what it was seven years ago.  There are two ailments recently acquired that say a lot of nasty things when I don’t cater to them.  In fact, one of them is muttering at me right now as I type.

I’ll start with the peaceful means, take some shortcuts, and see how it goes.

I’m not superstitious, but as I walked along, trying not to think while keeping numbers in my head, I could not help believe this was Nature’s answer to my failure to engage a commitment I made about a month ago.

Instead of the superstitious, the rational views are, “Incredible coincidences abound,” and “Doh!”

However, over the last couple of years I’ve been getting yellow flags popping up, saying that I should get prepared for letting go of Balsamea soon.

Nothing lasts forever.  Not even democracy.  Not even the planet.  Those two may be in greater jeopardy than my tenure as The Balsamean.

In any case, this Halloween, Nature screamed at me to be immersed in the soul of this forest refuge more deeply, to give up some other things that really are a waste of time.  That’s what I committed to a month ago, and it didn’t happen.  The opposite happened.  I figure it’s some sort of self-destructive homeostatic psycho-crap that overreacts when I try to make conscious effort to be more of what I can be.  It throws three anchors over the side when I’m trying to paddle somewhere.

Nature’s got a helluva way to give a guy a nudge to stick with the program.  Seventy trees?

For a while, I won’t have time or energy to be messing around with writing and research, photography and photo-based abstract art, movies, reading, tending hobbies like art collecting (my screen-saver rivals the world’s biggest museums, and I learn nifty stuff in the process), and other things that really don’t matter at all relative to why I am here, for salvation.  Conveniently, I don’t have to cancel or avoid social commitments to make more time for forest immersion, since all my friends are scattered out there on the trails.