Arbor Lane is the west boundary of Concordia.  This is the approach to the Y, where Balsamea Way goes right and Arbor Lane goes left:

Notice the little beech tree near bottom right center.  In June 2009 the trunk was about the size of a broom handle.  It is at the south entrance to Arbor Lane.  For easy reference, I’ve just now (really, right now!) named this tree Foley (from Fagus grandifolia, American beech). 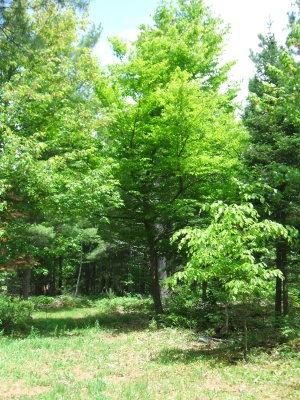 Another view, looking north into Arbor Lane.  The big beech at center is hereby now named Pometa, the Slovenian word for sweep or sweeping (tapping a bit of my maternal heritage).

I’ve never been big on naming individual trees because there are so many I’d like to name.  So I generalize.  I look up at any spruce and say, “Hey there, Cousin Sprucie.  How are ya?”  Playing on Bruce “Cousin Brucie” Morrow.  He’s done lots of things, but I remember him as the legendary radio disk jockey on WABC (AM 770) competing with “Murray the K” on WINS (AM 1010) in NY City during one of my former lifetimes. 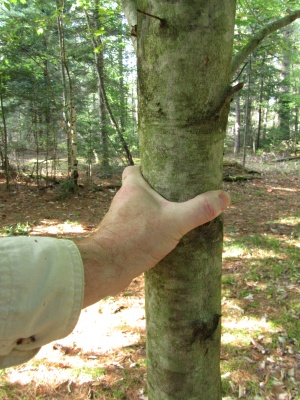 Another view north into Arbor Lane, this year:

In a different light … nothing in the forest is the same two days in a row:

Arbor Lane has always been one of the prettiest autumn places in Balsamea, with Pometa intermingling her branches with a big old red maple on the other side of the lane.  These fall pictures are from 2014.  Each year, more of Pometa’s uppermost branches die, but they will remain on the tree for many years.  The surviving lower branches will continue to flourish for many more years, too, slowly degrading.  It’s a typical pattern caused by beech “bark rust,” a disease almost all American beech have.

When you’ve lived a long time immersed in thousands of beeches every day, you don’t notice that they are dying.  You notice how amazing they are to keep living and to keep being so beautiful in the process of dying.  They really die well. 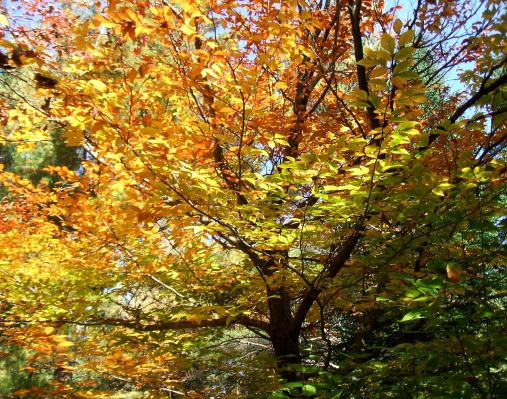 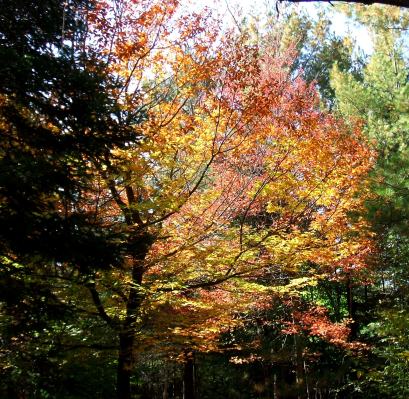 The view below is looking south from the north end of Arbor Lane.  That’s Pometa on the left, and an unnamed newcomer in the foreground right.  Its shape, color and manner are delightful additions to the lane.  Foley is in the background left of center.

You can’t get this view anymore (below).  Branches from Foley now coming in from the right and from a big balsam on the left bridge across this space.  Right now these trees are still green, but many other Balsamea trees are bursting with color.  At this time of year, the scene changes every day.  Maybe I’ll come back and add a picture of this view when it reaches peak color.

Pollution, defilement, squalor are words that never would have been created had man lived conformably to Nature. Birds, insects, bears die as cleanly and are disposed of as beautifully as flies. The woods are full of dead and dying trees, yet needed for their beauty to complete the beauty of the living. … How beautiful is all Death!   — John of the Mountains: The Unpublished Journals of John Muir, 1938, pg. 222

It’s not a bad idea to see the beauty in death.