After half a foot of sticky, soggy snowfall overnight, today the temperature at Balsamea rose well above freezing.  Along our trails, rapidly thawing snow showered from the trees everywhere in these dense woods, especially from the pines and firs, those bearers of great snow-loads. 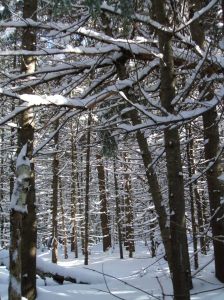 It fell in droplets, spoonfuls, cupfuls, bucketfuls and barrowfuls. The still, windless air said nothing while each of these sizes played their particular sounds, all around me patting, drumming, shushing and thumping their way through tree limbs, branches, twigs and evergreen boughs, then concluding each phrase with a strike on the snow on the ground.  They formed an unusual percussive symphony unique to this particular circumstance, in a special variation playing upon atypical conditions in the fresh snow cover.

When or where can you hear nature using trees and snow as instruments to drench the still air in sound this way, with a variety of visual effects, too?  When do you get to sit in the middle of the orchestra as it plays?  It filled the air within a great dome surrounding me, simultaneously at every volume possible to my ears.  Some notes played a few feet from me, ranging out to ones played barely within hearing.  Some struck funny notes on my ball cap and shoulders.

I’ve heard the prolific Buddhist monk Thich Nhat Hanh call this kind of thing a “bell of mindfulness.”  It is a call to take an opportunity to wake more fully to the reality of my immersion in this time and this place in this way, to sense more fully what is really here.

It led me to sense strongly the truth that Balsamea is a relationship.  It is a union of the soul of a forest with that of a man and a dog.  There are two non-resident Balsameans, too.  One has been part of Balsamea since the beginning, without whom it could not be.  The other is newly infused into this relationship, and, as part of it, has changed it, and thus changed me, since I am, after all, The Balsamean.

I sensed the presence of all these souls with me in that moment.  I noticed that they are always with me, very often in the forefront of consciousness, right there with the trees and the snow.

I’m grateful for that.  The snow-melt symphony awakened a surge of gratitude.  Thank you, Balsameans all. 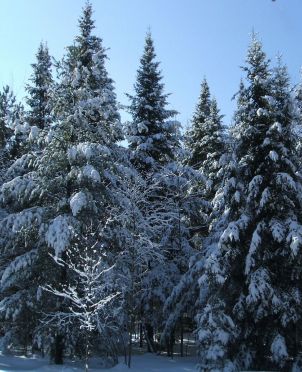 Balsamea has a sense of humor, too.  Immersed there as I was, when I saw and heard an especially big swoosh-crash-and-thump of a barrowful of snow tumbling through the trees from high in a big pine, it brought to mind Tom Hanks and the coconuts.  If you’ve seen the 2000 movie Cast Away, you know what I mean.

There were three or four funny scenes about coconuts.  The first ones involved his being surprised when a mysterious thudding sound kept happening as coconuts fell from the trees.  He did not realize what was making the sound until one of them almost hit him.  Before that, there was this little scene where he yelled at the forest for harassing him with these inexplicable thuds …

But of course I didn’t yell at the snow, “What is that?”
I just smiled and walked on, with Balsamea’s soul kin
— of all kinds — infused in me, making me The Balsamean.